Infants and children seem to love watching the television, and many adults love seeing their kids watch TV as well. After my daughter was born, I searched for some articles clarifying the impact which television sights and sounds have on young children. Our families, friends, co-workers, and even the random lady at the grocery store have advice about TV time (and pretty much any topic), and advice from one person to the next is frequently contradictory. Fortunately, there is plenty of research describing the implications of increased amounts of television exposure. A great summary on national data is available here, and the specific learning implications are specified here.

There are many important details within each article, but the following quote sums it up quite well: “Audible television is associated with decreased exposure to discernible human adult speech and decreased child vocalizations. These results may explain the association between infant television exposure and delayed language development.”

Children and the Television Experience

As the child views the screen they are processing the non-stop and overstimulating content to the best of their ability. It is the item of peak interest. There is an entire world of complexity beyond reality and beyond imagination all encompassed within a viewing box in the living room. The child is completely invested in the television moment, and the adults are grateful for the short break from the trials and tribulations of parenthood.
Once the world of fascination is turned off, the mind of the child is slow to disconnect from the television. Nothing in the actual living area is able to reach that level of stimulation, but it doesn’t matter because their mind is still attempting to process and store the massive quantity of information which was recently projected onto them. 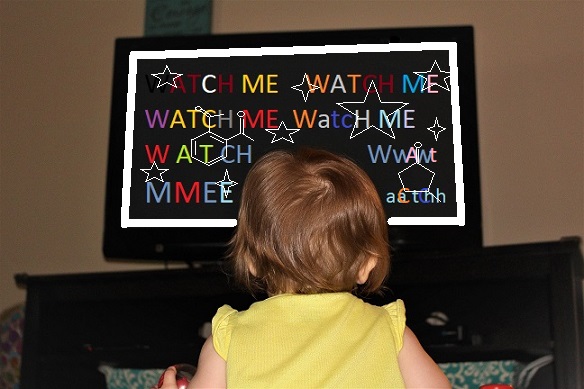 You were probably feeling some emotional excitement, and you may have been feeling a bit exhausted from the theatrical journey of the movie. Most importantly, you are engrossed within each moment of the movie. After the movie you enjoyed remembering the specifics of what you saw and re-experienced the excitement of your favorite scenes.

When a young child watches the television, there are some similarities. They are also completely engrossed within each moment of the show, and they are also emotionally stimulated by the screen activity.
The child is also hyper stimulated with the thrilling experience of non-stop motion, happy sounds, and bright colors. Their ability to categorize and discuss the events are lacking, so the experience is inefficiently stored within their developing mind. The TV experience takes priority over the sights, sounds, smells, touches, and tastes of their current experience, and their ability to process their surrounding environment is hindered.

Perceptions after the TV Experience

Since infants and young children are incapable of adequately processing that level of stimulation, the jumbled excitement is scattered across their mind. Sensory learning experiences become secondary and different from what they were before the television stimulation. Processing the words of people is less interesting, and communicating with people becomes less relevant.

NPR has a great article summarizing the recent recommendations changes made by American Academy of Pediatrics (AAP). ‘No screen time before the age of 2’ has been replaced with allowing limited educational content after 15 months, and video chat communication (Skype or iPhone Facetime) are OK for communication with family and friends.

However, if you read beyond the quoted headlines, the AAP has three important recommendations for children under 5 years old:

I am in full support of the AAP recommendations. Rather than exposing my daughter to overwhelming screen stimulation, I will do my best to fill her day with broad ranges of human interaction, toys for learning and imagination, and as much time outdoors as possible.

Please let me know if you would like me to expand on any of these topics.

Daniel Miller
With experience in the different fields of chemistry and psychology, I hope to share some thought provoking personal well-being topics related to physical health, psychology, rational thought, and spirituality.
dkmillerbsu28@gmail.com