The Popular Presentation of Weight Loss 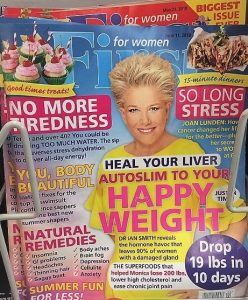 I saw this magazine as I was waiting in the checkout line at the local grocery store. This fitness magazine is for women, and this seems to fit the content norms that I am accustomed to seeing. There is a model saturated in make-up on the cover. I can’t see the name of the magazine since the adequate amounts of hair product are maximizing hair volume to cover the letters. Weight-loss is the main theme as usual. There are processed food treats (upper left corner) to entice the reader to eat low-calorie junk food and read the magazine content. There are at least 4 miraculous well-being cures (in this case tiredness and stress are solved, and beauty and inexpensive supplements will resolve many health concerns). For me, the most ridiculous part of the magazine was the ‘Drop 19 lbs in 10 Days’ promo in the bottom right corner. END_OF_DOCUMENT_TOKEN_TO_BE_REPLACED

Infants and children seem to love watching the television, and many adults love seeing their kids watch TV as well. After my daughter was born, I searched for some articles clarifying the impact which television sights and sounds have on young children. Our families, friends, co-workers, and even the random lady at the grocery store have advice about TV time (and pretty much any topic), and advice from one person to the next is frequently contradictory. Fortunately, there is plenty of research describing the implications of increased amounts of television exposure. END_OF_DOCUMENT_TOKEN_TO_BE_REPLACED

There are already thousands of articles presenting a topical analysis of the popular trend, the Nordic diet. As usual, there are lists of what you can eat and what you cannot eat followed by comments regarding what should be eaten in moderation. Plenty of books have already been published on the topic, many of which follow the ‘weight loss’ sales trend in the title. END_OF_DOCUMENT_TOKEN_TO_BE_REPLACED